In my last post I described the traditional apparel retail business model of making product design decisions six to nine months ahead of time, then committing to big buys and waiting for sales data to determine whether the bets were placed on the right products. I described Uniqlo’s strategy of avoiding trendy fashions and building a supply chain to deliver technology-based differentiated products which appeal to the masses. 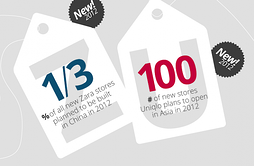 At the other end of the spectrum is Zara. The Spanish apparel company has embraced the fast-changing tastes of consumers, and has built a supply chain which allows it to deliver new fashions as soon as a trend emerges. Zara delivers new products twice each week to its 1670 stores around the world.  This amounts to over 10,000 new designs each year!  It takes the company only 10-15 days to go from designing a dress to selling it. Zara is not leading the fashion world; rather, it is seeing what is popular and is following that trend.

How is Zara able to do this?

Zara was built to be fast and flexible from its inception. Rather than subcontract manufacturing to Asia, Zaraowns 14 highly automated Spanish factories, where robots work around the clock cutting and dyeing fabrics into “gray goods”. Like Uniqlo, Zara has leveraged automaker technology within these factories, using a “just in time” inventory approach which was pioneered by Toyota Motor Company.

Zara has a partner network of over 300 small shops in Portugal and Galacia which handle the final stage – assembling the gray goods into dresses and suits. With this approach, if an item looks like a winner, Zara can increase manufacturing very quickly and deliver them to their stores.

Zara’s approach has not gone un-noticed. Some U.S.-based apparel companies are now using this approach of manufacturing longer-lead time “gray goods” in Asia and performing the final manufacturing in the U.S., allowing them to quickly get the finished products to store in the U.S.

Uniqlo and Zara. Two very different approaches, both very successful. In my next post we’ll explore H&M and then look at what all three retailers have in common.