In advance of the Project in Conjunction with P1VOT “Breakfast with The Disruptors” event to be held at the Magic Las Vegas Conference, Fung Global Retail & Technology and First Insight surveyed 102 retail industry leaders to assess their holiday 2016 business outlook. The survey respondents included 81 retailers, 13 wholesalers and eight other retail industry specialists. Of this group, 48% support buying and merchandising decisions within their organization, 28% support planning and 24% fulfill other functions, which include operations, accounting, management, sales and CEO. Fung Global Retail & Technology and First Insight conducted the survey the first week of August 2016.

As a point of background, First Insight was founded in 2007 and is a cloudbased technology company that tests consumers’ reactions to new products across many categories, before costly investment decisions are made. The company uses predictive analytics to determine which trends, price points and design attributes resonate with consumers. Together with First Insight, Fung Global Research & Technology reached out to retailers, buyers and planners and asked these frontline industry leaders to completde our holiday 2016 retail forecasting survey.

Respondents’ stated reasons for an optimistic holiday outlook included “the economy is on the rise,” “pricing has been adjusted to be more competitive,” “companies are levering omni-channel offerings,” “new marketing,” “promotions” and “expanded product lines.” The 5% of survey respondents who are pessimistic regarding holiday 2016 cited “lighter store traffic,” “the economy” and “oil prices” among the reasons for their outlook. 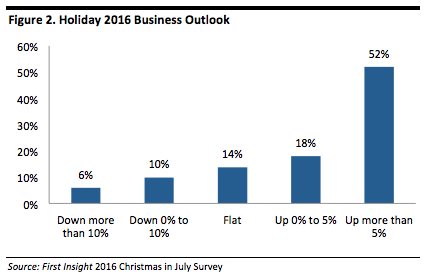 The National Retail Federation (NRF) has not released its 2016 holiday outlook, but, according to its 2016 Retail Holiday Planning Playbook, sales for holiday 2015 were up 3% from 2014. Additionally, retail sales for the first six months of 2016 rose by roughly 4%, which is higher than the 10- year average of 2.7%. In February 2016, the NRF projected that overall retail industry sales would grow by 3.1% in 2016; in July, the organization raised its estimate to 3.4%.

Respondents Split on Impact of US Presidential Election
Survey respondents were split on whether the US presidential election will have a positive, negative or neutral impact on holiday business this year. The nation is divided!

In 2008, ShopperTrak found that mall foot traffic dropped by 3.7% in the week before the election and by 6.3% during the week of the election compared with the corresponding weeks in the previous year.

In 2012, ShopperTrak expanded its study to include traffic data from top retailers nationally instead of just data from malls, but still found that retail traffic fell around election time. The data revealed a decrease in traffic the weeks prior to and the week of the 2012 presidential election compared with the same weeks in the prior year. Two weeks ahead of Election Day, retail traffic decreased by 6.1% and one week ahead, it decreased by 12.9%. During election week in 2012, traffic declined by 12.4% compared with the same week in 2011.

Regular gas prices in the US dropped to $2.15 per gallon in the second week of August, which is 18.2% lower than what they were in the same week last year. Crude oil prices have fallen below the $40-a-barrel benchmark, which has driven an eight-week decline in costs at the pump. High gas production and inventory levels are also keeping gas prices depressed. The US Energy Information Administration forecasts that gas prices will be even lower in the second half of 2016, averaging $2.06 per gallon, and that they will average $2.26 per gallon in 2017. 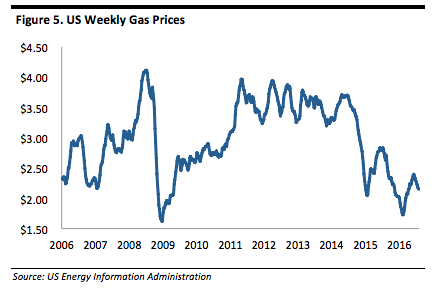 As gas prices decrease, consumers spend less on gas, which increases the disposable income they have available for other purchases.

Survey Results Skew Positive on Weather, Global Economy, Raw Material Prices and Labor Resources
Respondents were also surveyed on other topics that may be relevant to holiday 2016, including the impact of weather, changes in the global economy, the Brexit vote, changes in raw material prices and availability of labor resources. Those surveyed chose “no impact” most frequestly in response to questions about these factors, but the responses still skewed positive overall.

Although warmer weather played a big role in holiday season sales last year, 54% of those surveyed think that weather will have no impact on this year’s holiday sales, while 27% think it will have a positive impact. Only 15% predict that the weather will negatively impact holiday 2016 sales. Other notable survey findings include: