Over the past few years, augmented reality has gone from being a curiosity for coders to a major form of advertising. A recent article on VentureBeat focused on Blippar, an augmented reality advertising firm. According to the source, 1,000 brands and publishers are already using this one company's AR apps and ads. 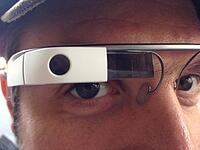 Hangups with augmented reality
However, for many people, AR is still invisible. That is because if you want to engage AR, you have to first know what to look for and how to unlock its secrets. Up until very recently, this process has required people to identify augmented reality codes and scan them with their smartphones. If the pattern can be read, then it will display some kind of new data on the phone.

Usually, AR codes hide coupons or other promotional deals. Other times they may just include an advertisement, which can leave the viewer feeling a bit like Ralphie in the movie The Christmas Story when he cracked a secret code only to find a message telling him to drink his Ovaltine.

Even with these inconveniences and disappointments, there is enough interest in AR that Blippar's logo has already been plastered on 3 billion products, including, according to VentureBeat, 100 million pages of print in magazines and newspapers.

Changing the game with Glass
Wearable technology has the potential to take AR to the next level (see First Insight's recent study on the wearable device market). Specifically, Google Glass cuts the inconvenience out of AR advertising by enabling users to access AR just by looking at it instead of having to get their phone out and scan a code. Companies like Blippar are already developing ads exclusively for Glass that will provide a new level of interactivity for viewers. For example, one of their more popular apps, which was developed exclusively for Pepsi, allows Glass users to play a small soccer game by looking at Pepsi products.

The game works with a code on Pepsi cans. When someone wearing Glass looks at the can, their device recognizes the code and offers to launch an app. The relatively simple app sets up a set of goalposts on the HUD. The user can then aim a virtual soccer ball with their eyes and "kick" it into the goal. The game isn't complex, and it's not persistent, but it has people looking at Pepsi products, and that's all that matters when it comes to advertising.

Augmented reality and big data
That's also where the prospect of AR gets interesting for marketing executives. When an ad is scanned and an app is launched by a device, the company sponsoring the app gets access to a whole range of useful information. According to VentureBeat, every time someone plays Blippar's soccer game, Pepsi gets to know how long the person played the game, as well as their location, preferred apps and basic demographic profile.

In the age of big data analytics, access to this kind of information is invaluable. By analyzing who is looking at what and for how long, marketing executives can focus their advertising campaigns with laser-like precision. If they want to market a product to a certain demographic, they can analyze their numbers to determine what kinds of apps do best with their target audiences. Then, they simply make an app that fits the mold and release it to the public. If the app fails to attract the attention the marketing team thought it would, they still have access to another data set based on the new ad. That information can then be analyzed and used to craft a new campaign, and so the cycle continues.

Whether you're an advertiser or a consumer, you can expect to see a lot more augmented reality in the near future.