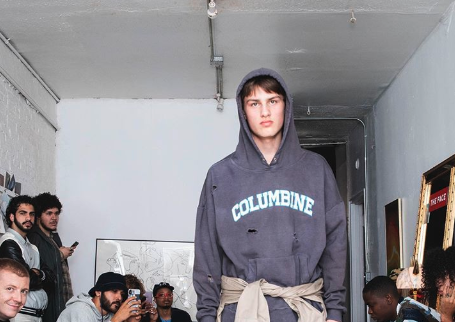 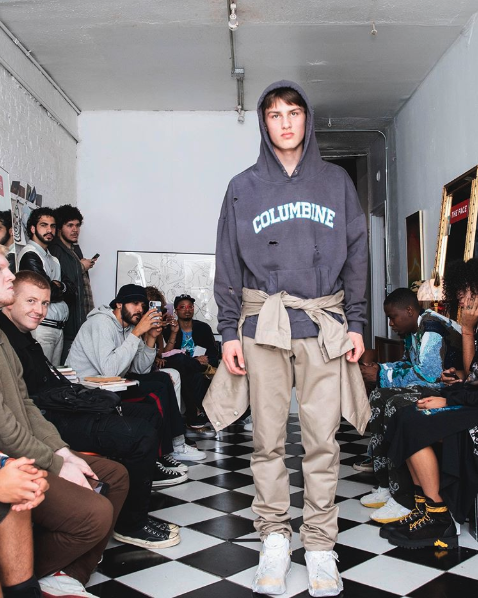 This week in fashion school we learned that there is a difference between daring and disturbing, courtesy of hyper-hip, fashion forward youth label Bstroy. One is art. The other is the antithesis of commerce.

Bstroy (or (b).stroy) lit up the chatter-sphere when it unveiled its Spring 2020 collection during Fashion Week in New York. Mixed in with the t-shirts sporting colorful artwork and the indecipherable sayings and faux brands popular with teens was a group of four school hoodies  that looked as though they had been worn by shooting victims, bullet holes and all. They were modeled by the usual dead-eyed, slinky young men you’ll find ankling any runway event for youth-oriented labels in the business of selling fashion.

But, embroidered on each of the hoodies, in the customary letter-sweater font, were the names of four schools made infamous by a horrific shooting spree—Columbine High School in 1999, Virginia Tech in 2007, Sandy Hook Elementary in 2012, and Marjory Stoneman Douglas High School in 2018. The total of children and staff killed and injured in those four attacks was 159.

To illustrate just how inappropriate and misguided was the attempt by designers Dieter Grams and Brick Owens to make an anti-violence statement, imagine if in the 1960s a fashion house brought out a line of pink suits like the one worn by Jacqueline Kennedy the day the president was shot, blood stains and all. Or if in the 1980s a fashion eyewear house introduced glasses designed to appear blood-smeared, like those of Beatle John Lennon after he was gunned down on the streets of New York. Or how about a line of Iraq War-era military clothing with faux battle damage?