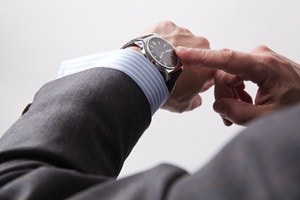 Despite the oncoming disruption from the Apple Watch, luxury watch retailers don't seem to be very scared of seeing their market share taking a hit going forward.

In many industries, established giants are finding themselves scrambling to compete with the new, trendy startups seeking to topple them and take their place on top of the mountain. With the rise of wearables, connected devices that make up just one part of the larger "Internet of Things," traditional fashion and clothing retailers are on their heels trying to figure out how to compete with the rise of wearable tech.

Watchmakers, particularly in the luxury watch market, have certainly taken notice of the smartwatches that promise to take the retail market by storm. The Apple Watch, the flagship product in the nascent smartwatch space, is sure to be a disruptive force in fashion merchandising in this vertical, bringing changes to how high-end watches are designed, priced and packaged. Despite the oncoming disruption from the Apple Watch, luxury watch retailers don't seem to be very scared of seeing their market share taking a hit going forward.

(Read more from VentureBeat on how the First Insight platform was used to predict which smartwatches consumers prefer and what they are willing to pay for them.)

Forbes reported that initial analysis of the Apple Watch showed that the new smartwatch would compete primarily with non-luxury watches. With the announcement of the 18 karat gold cases, however, Apple made it clear that it would try to compete in the high-end space.

For experts in the traditional luxury watch industry, this news wasn't actually all that troubling. Forbes noted that the smartwatch, while certainly still a watch, is subject to technological and industrial advancement. Some experts have even gone as far as to point out that the Apple Watch is just a miniature iPhone that one wears on his or her wrist. Like all other Apple products, the value of the current model cannot hold, especially once a new model is released.

Long-term value, the hallmark of a true luxury watch, does not exist in the new wearables market. After a few years, the value of a smartwatch will approach zero - the exact opposite of a real luxury watch that will increase in value over time. A watch cannot be considered a luxury item if its long-term prospects are that bleak.

While some analysts believe that Swiss luxury watch makers will eventually have an answer for the Apple Watch, it is unlikely to be a straightforward smartwatch. As has been noted, traditional luxury watchmakers want to create a product whose value increases over time, something that the technology-dependent smartwatch cannot do. True watch aficionados are unlikely, then, to buy into the wearables trend when it comes to their precious collectibles.

Luxury has been here before

Another reason why luxury watchmakers aren't quaking at the impending deluge of smartwatches may be because they've seen this before. The New York Times wrote that quartz watches made their entrance into the market during the 1980s, stoking fear in the luxury timepiece market by promising an infallible way to tell the time. But rather than damage the traditional luxury watch market, it actually enhanced it.

"Our market was actually born in the middle of the 1980s," Davide Parmigiani, a prominent dealer in vintage watches, said in the New York Times.

Luxury consumers weren't driven away from the expensive, handmade watches that defined the luxury market. Instead, they gravitated toward them. Discerning customers craved the distinctive idiosyncrasies that defined watches at the highest end of the market. Those who have been in the business a long time remember how quartz failed to dislodge luxury timepieces. These historically minded observers have enough perspective to avoid panicking about the impact of smartwatches.

Utility is not the highest good

Sure, a luxury watch will never be able to adjust your thermostat from miles away or take biometric measurements. But trying to value a high-end watch by its utility is exactly the wrong way to go about it. Collectors are looking for something more than a fancy gadget, not matter how useful it might be.

In The New York Times, devoted luxury watch collectors noted that their watches were an actually an escape from the 2D world of technology.

"People spend so much time in a two-dimensional universe now, it gives them pleasure to consult these beautiful three-dimensional objects," said Edward Faber, director of the Aaron Faber Gallery in Midtown. "It's a way to distinguish oneself."

That may be the crucial point - smartwatches that gain widespread adoption may make the wearer look trendy, but that isn't what luxury is all about. It's about distinction, making the wearer stand out in the crowd. The Times wrote that luxury watches aren't just a timepiece. They are a status symbol - a token of fine taste and respect for the long-held tradition where men (and increasingly women) of status carried ornate timepieces.