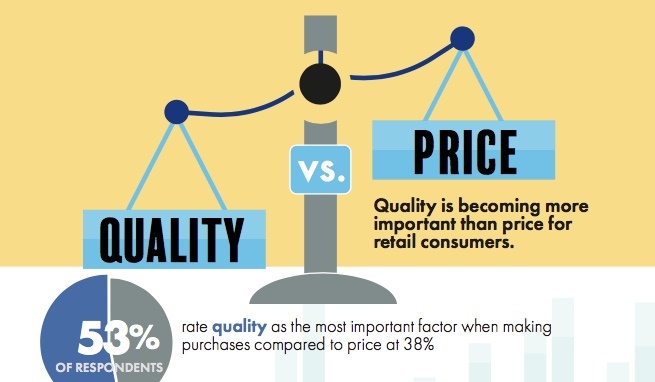 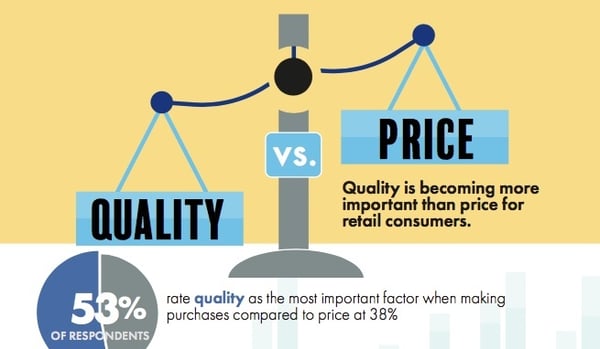 June 25, 2018 – Quality is becoming more important than price to most consumers, as 53 percent rate quality as the most important factor when making purchases compared to price (38 percent) according to a new report by First Insight, a technology company transforming how leading retailers make product investment and pricing decisions. The report also notes that consumer expectations for discounts are falling as an increasing proportion of consumers surveyed said department store discounts had no influence on expectations for discounts across other categories including vehicles, smartphones, furniture, home appliances and home electronics.

The survey queried 1000 participants in the U.S. on their shopping habits, purchase behavior and influences driving decisions, and tracked changes in consumer sentiment on the impact of widespread discounting by department stores and mass merchants from March 2017 to December 2017.

“For years, consumers have been trained by department stores and mass merchants to focus on finding deals, and many retailers have responded with deep discounts,” said Greg Petro, CEO and Founder of First Insight. “The results of this study indicate that we may be reaching a tipping point, as retailers who have been focused on providing consumers with the quality, differentiated products they want and the price they expect are gaining greater traction and changing the consumer mindset. As the pendulum swings away from discounts, retailers have an opportunity to capture greater sales through quality products in every category, from apparel to furniture and appliances.”

According to the results, furniture and vehicle categories reflected the sharpest percentage change in expectations with the number of people saying discounts had no impact on purchases rising 98 percent and 74 percent respectively. Home appliances (36 percent), home electronics (27 percent) and smartphones (26 percent) also saw significant increases in people who said that discounts had no impact on their purchase decisions in these categories.

Download the infographic that illustrates the key findings of the survey here.

Influence of Discounts on Purchase Decisions in Furniture Fall the Most

The percentage of women and Millennials who said discounts do not impact their purchase decisions on vehicles nearly doubled (97 and 93 percent respectively) from March to December 2017. While the percentage of men also increased by 52 percent, it was by a much slimmer margin, as were Generation X (60 percent increase) and Baby Boomers (78 percent increase).

While a growing percentage of men (61 percent more) and Baby Boomers (64 percent more) show lowering influence of discounts on smartphone purchases, the impact of discounts on women’s and younger generations’ purchases is about the same or increasing. Women saw a nine percent decrease in the percentage of respondents who said department store discounts have “no influence” on expectations for smartphone purchases, with Generation X decreasing by five percent in December, compared to March of last year.

The percentage of Baby Boomers reporting that discounts influenced their home electronics purchases dropped nearly 60 percent, significantly higher than Generation X (14 percent) and Millennials (18 percent). Men are also less likely to be influenced by discounts in home electronics than women, with a 34 percent increase in respondents in December compared to March saying department store discounts had “no influence” on expectations in this category, compared to an only 18 percent increase in women.

First Insight is the world’s leading provider of solutions that empower retailers and brands to incorporate the voice of the consumer into the design and merchandising of new products. Through the use of online consumer engagement, the First Insight solution gathers real-time consumer data and applies predictive analytic models to create actionable insights, which drive measurable value. Retailers, manufacturers and brands use the First Insight solution to design, select, price and market the most profitable new products for reduced markdown rates and improved sales, margins and inventory turnover. Customers include some of the world’s leading vertically integrated brands, sporting goods companies, department stores, mass merchant retailers and wholesalers. For further information, please visit www.firstinsight.com.